In 1912, Americans elected a new president. Millions of men flooded to the polls to exercise their right to vote. Women could not. No matter what you knew about the candidates or the issues of the day, if you were a woman you were considered unfit to vote in national elections. You had to follow laws but had no voice in making them.

Voting rights activists, called suffragists, fought to change this. Suffragists attacked claims that women weren’t as strong or as smart as men. They marched, held conventions, wrote to lawmakers, and even went to jail. 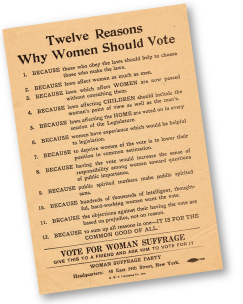 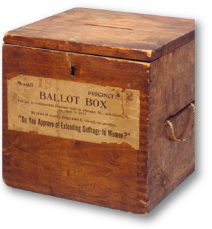 The Long Battle for Suffrage

Politically minded women began fighting for the vote in 1848. But it wasn’t just a battle to change the minds of men. Not every woman thought women should vote. Some believed that women belonged at home, not in the public world of politics. Suffragists argued that without the vote women would remain second-class citizens. 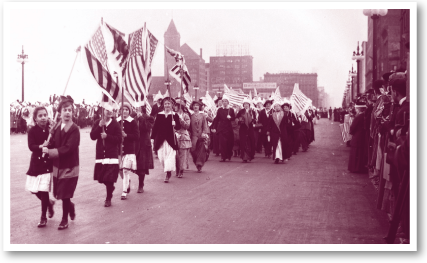 Suffragists sold buttons and pins with their rallying cry—Votes for Women—to raise money for and encourage support of their cause.

Suffragists worked to persuade male voters and lawmakers to extend voting rights to women. Voting, they argued, helped mothers protect their children, and being denied the right to vote was discrimination.

In 1912, Chicago voters were polled on the question of female suffrage. When asked, “Do you approve of extending suffrage to women?” the majority of male voters replied no. The vote was only to gauge public opinion. It had no legal standing.

In 1913, after decades of speaking out, women won suffrage in Illinois. After the victory, many continued to push for a constitutional amendment to extend the right to all American women. Finally, in 1919, the Nineteenth Amendment passed. It granted all American women the right to vote and was ratified on August 18, 1920.

Explore the Votes for Women collection

A day of public protest in Chicago in 1963, one step toward ending school segregation.
Read the School Boycott story