Civil rights issues were on many Americans’ minds in 1963. The growing movement was hard to ignore, even if you didn’t participate. Activists protested racial segregation nationwide, and protests sometimes turned violent.

In the spring, youth in Birmingham, Alabama, demonstrated against segregation in their city. In late summer, the focus shifted to Washington, DC, when 250,000 Americans marched for jobs and freedom. By fall, the movement had come north to Chicago. 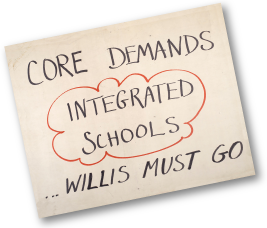 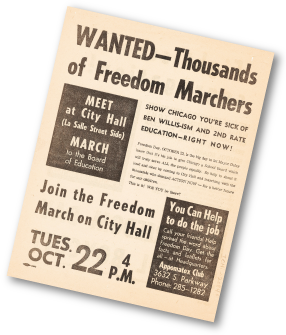 Segregation Is Not Just a Southern Problem

As a student in Chicago in 1963, you couldn’t choose where to go to public school. You had to attend the one in your neighborhood. Since the city’s neighborhoods were either black or white so were its schools. Public schools in black neighborhoods were often outdated and always overcrowded. Although Superintendent Ben Willis and the Chicago Board of Education tried to improve these conditions, they resisted integration. 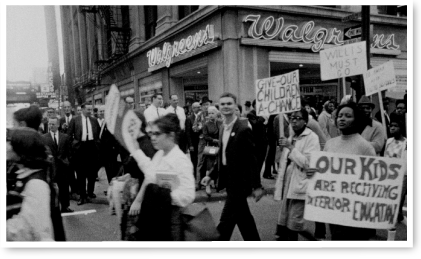 On October 22, 1963, a coalition of civil rights groups staged Freedom Day, a mass boycott and demonstration against segregated schools and inadequate resources for black students. Almost half of Chicago’s public school students skipped class, leaving many schools on the South and West Sides virtually empty.

The climax of Freedom Day was the march to the downtown office of the Chicago Board of Education. Thousands took to the streets, carrying signs that voiced their frustrations. Many targeted Superintendent Ben Willis, comparing him to segregationist George Wallace, the governor of Alabama. Police met the nearly 10,000 protestors and prevented them from entering the Chicago Board of Education building.

The protest ignited other demonstrations, each demanding an end to segregation in Chicago. Change occurred slowly, but this activism led to increasing support for integration and revealed that racial segregation extended beyond the South.

The fight for suffrage at the local and national levels during the 1910s.
Read the Votes for Women story